A one-off performance of visual, dance, music and sound artists, plus a super choir of hundreds that explored the human impact of World War One, and which was performed for an audience of over 5,000 people to commemorate the centenary of the outbreak of the First World War.

Commissioned and produced by Quays Culture.
Funded by Arts Council England and AGMA
Supported by The Quays and MediaCityUK 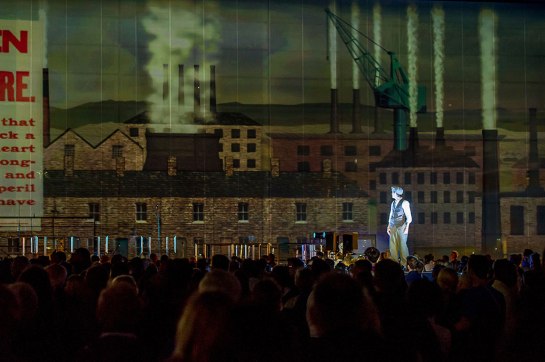 “… As our focus shifts to Salford, the screen fills with Industrial images.  The simplistic set is used well by Matt Baker, each character separated on a different piece of staging, allowing the audience to consider their personal experience of war, in a clear and engaging manner. The mother’s pain and fear, encapsulated so fully by Jo Higson, in contrast to the guileless wide-eyed boy, Danny Childs, keen to claim the King’s shilling, shows the skill of writer Helen Newall, immersing the audience into the confusion of angst and excitement this period brought into the home.  The persuasively worded entreaties such as ‘Join the Salford pals’ coercing our young soldier to do the honourable thing, are delivered in a silver-tongued style evocative of period recordings by actor Ben Tolley…”